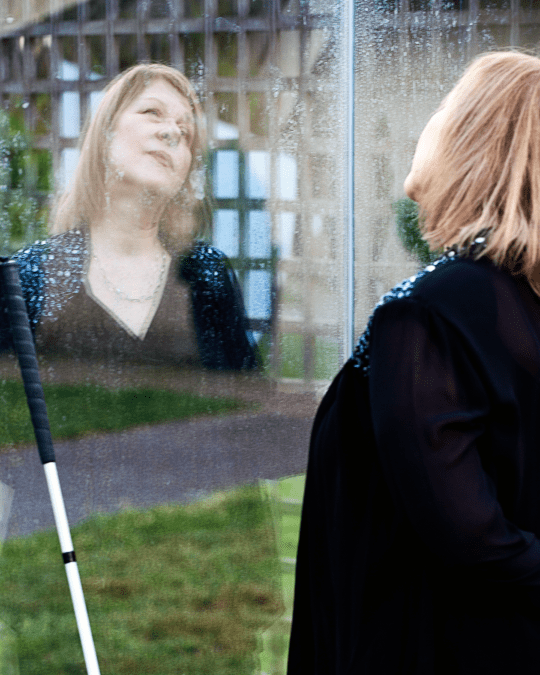 I am a third generation blind woman. My disability, congenital aniridia, is hereditary and like my mother, grandmother and uncle I was born blind. When I was 40 years old, I learned that I had also acquired a hearing impairment and started using hearing aids and other assistive technology. My vision impairment was worsening, and I started using a white cane, video magnifier to read print and an adaptive computer.

For a good part of my life, and influenced by attitudes at the time, I was able to “try to pass”, which was made easier by the fact that I didn’t have to use a white cane to get around, and I could read regular print. In those days, sighted professionals encouraged those of us with “partial sight” to try to look “normal” that is, “sighted”. The mentoring I received from other blind women, and changing attitudes about blindness, caused me to consciously abandon the notion of “passing” and accept the idea that a competent blind woman who uses a white cane, Braille, or assistive technology is a beautiful and desirable woman
I volunteered in disability rights advocacy groups in the 1970s and 1980s, hoping to change negative attitudes and stereotypes about disability, and advocating equal rights, which helped win enactment of the Virginians with Disabilities Act in 1985 and the (ADA) in 1990.

In 1982, I helped co-found the ENDependence Center of Northern Virginia (ECNV), a disability rights and advocacy center run by people with disabilities, and then worked at the District of Columbia Center for Independent Living (DCCIL as its Program Director. This was a deliberate change in my career path driven by my increasing involvement in disability advocacy. Since 1994, I have worked as the Director of Advocacy and Outreach at ECNV, advocating for community integration and equal access for people with disabilities in the place I now call home.

A chance discussion with a taxi driver, led me to begin exploring my lifelong passion for dancing. Ballroom and swing dancing has become a primary avocation. I love dancing because it’s challenging to learn and perform the dance patterns

When I dance I feel accomplished, beautiful, elegant, happy, and entirely in the moment, enjoying the music and the synergy I feel dancing with my partner.