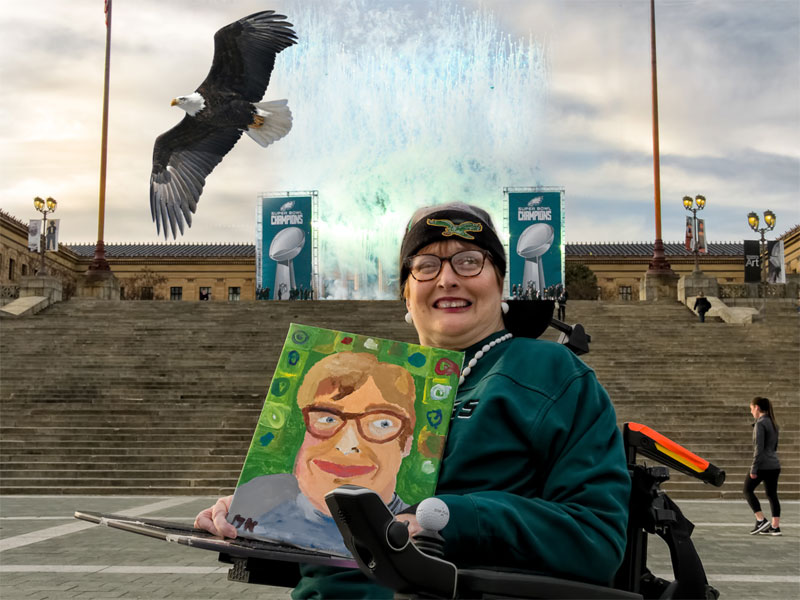 I was born a twin in 1956 in Philadelphia. We were both very sick babies, and my sister died at five days old. I was diagnosed with Cerebral Palsy
around that time. I was part of a very big family, but as I was growing up, they realized I wasn’t responding, and I couldn’t hear them. I was Deaf
too. As a child, I couldn’t understand my family and was forced to read their lips.

For my physical disability, I used leg braces and crutches to walk and a wheelchair too. I went to a school for only students with disabilities
called Widener Memorial School. To talk, I typed, but it was hard since I didn’t understand my teachers. I had all kinds of therapy at school:
physical, occupational, and speech. Over the summers, I attended Variety Club camp, and this was where I was first introduced to finger
spelling and American Sign Language. To learn to communicate better, my mother took me to the Pennsylvania School for the Deaf. I took sign
language, cooking, and sewing. I was scared to be in this new place, but the staff was very encouraging.

After graduating in 1977, I went to Elwyn and was a good worker for twelve years. People assume I have cognitive issues, but I could show I
didn’t when I worked so hard. My mother’s health was deteriorating, but she was still helping me until she finally had to move into a nursing
home. Then my father had to help instead, but one day, he fell, and I had to use my old TTY relay to call my brother Mike and my sisters and
brothers. Dad could no longer help me care for myself, so Mike called my doctor, who suggested I try to get a spot at Inglis House, but there
would be a waiting list.

While I waited to get a call from Inglis House, I alternated staying for two weeks in Overbrook with my sister Peggy, Kathy in New Jersey, and Terri
in Ocean City also in New Jersey. None of my siblings could do all of what I needed, so they rotated. They were still very stressed because I
saw them fight, and that made me feel sad and alone. We were all relieved when the call finally came saying Inglis House was ready for me.
Moving in took a little while for me to get comfortable, but I like living here now. I was even Treasurer of Resident Council for twelve years. I
worked to write checks for bills, and I helped residents mail bills and manage their bingo money.

In 1997, my father passed away, and my siblings came to tell me, and my mother followed suit in 1998. We mourned their passing and celebrate
their lives. I loved my parents very much and miss them.

“I have enjoyed being in the Bold Beauty Project, and in my picture I am at the Eagles parade because they are champions and I have the self portrait I painted.”