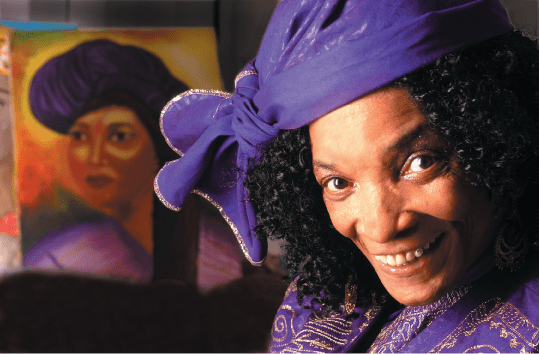 She was diagnosed with Cerebral Palsy at age two.  The doctors recommended that she be placed in a group home, where she spent the next 40 + years.  When Queenie first lived in the homes, they were still segregated.  She experienced abuse in the form of being force-fed and locked in closets.  When group homes became desegregated, Queenie was aware that the “white side” had better food, better treatment and more beautiful surroundings.  As she blossomed into a young woman, she had a secret affair with one of the orderlies who worked at the home.  He would be one of several men who were able to look past her crippling disease and see her beauty, inside and out. Queenie also began participating in the Florida Ms. Wheelchair pageant and won numerous awards including Miss Congeniality, and Runner –up. It was at one of these pageants that she had the opportunity to meet Ms. Diana Ross!  As Queenie began to mature, she wanted to live in her own home.  It was then that she learned how to self-advocate and went to court to demand her rights as an individual.  Queenie was granted the freedom and financial support to live in her own apartment, one of her greatest dreams.  Most recently, Queenie has had her artwork shown in New York City, another of her dreams.

“I want everyone to understand that life is limitless in its opportunities, regardless of your perceived obstacles. I also want people to be able to look beyond the disabilities of others and understand that we are all people who feel, love, create, dream and achieve.”