Raw and Uncensored: Women with disabilities are bold and beautiful at the Dorsch

Sabrina Cohen’s portrait on display at the Dorsch Gallery is striking, but her story yanks the rug from under you. The 28-year old Sandra Bullock look-alike has spent half of her life in a wheelchair. “I was fourteen at the time of my accident,” the quadriplegic explains. “On Halloween night 1992, a friend and I hitched a ride to a party. There were six of us in the car when the driver started drag racing on Alton Road and 58th street on the Beach. Two cars were demolished, and I was the only one who didn’t walk away.” The driver and other passengers sustained minor injuries. Cohen was not wearing a seat belt.

Cohen is one of twenty women- whose disabilities range from multiple sclerosis, spina bifida, cerebral palsy to visual impairment- who posed for an unusual and compelling photography exhibit titled Uncensored Life: Raw Beauty orchestrated by the Center for Independent Living of South Florida (CIL) in collaboration with the Miami Ad School. Organizers say society is so consumed with the ideal body that women with disabilities are often depicted as helpless victims or as heroines overcoming insurmountable odds. They hope this project will help transform stereotypical perceptions of females with physical and sensory challenges, nearly 250,000 of who live in Miami-Dade County.

The original concept was to produce a calendar of nudes that would raise funds for the CIL, a nonprofit agency that teaches independent living skills and provides job placement, computer training, housing, and interpreting services free of charge to anyone with a disability. But when photojournalist Ginny Dixon agreed to help, the project evolved into an exhibition. Funds generated by the show will support the CIL’s programs. Dixon, a former Los Angeles Times staffer who shares a Pulitzer Prize for coverage of the riots following the Rodney King trial, secured the assistance of Darryl Strawser, director of the Miami Ad School’s Fashion and Photo Program. Dixon is also an Ad School faculty member, and together the pair enlisted eight students from the South Beach based school who then paired off with the models.

“I thought here was a challenge for the students as well as a remarkable opportunity to engage in a project of substance that is close to my heart,” Strawser says. He was diagnosed with amyotrophic lateral sclerosis-better known as Lou Gehrig’s disease- sixteen years ago. He has since lost 75 percent of the muscle mass in his arms and 25 percent in his legs. He was driven to participate in what he recognizes might be his last photo shoot. “I didn’t know if I could shoot anymore, but this project was so important and the girls so inspiring that I was motivated by their sensuality and the air of freedom and confidence they projected. I was humbled by them.”
Some of the images were taken inside the Miami Ad School, while others were shot on location across South Florida. “We were given the option of posing in or out of our wheelchairs,” Cohen says. Photographed by Dixon in a bikini bottom and a body-painted tube top that reads “Unlock the Cells,” an allusion to Cohen’s fashion line and research advocacy. The sultry brunette was captured lying on a net stretched across a swimming pool at a Golden Beach home. As the sun ripples off the water below, the tanned and curvaceous model beams a million-dollar smile, with the faintest hint of mischief glinting in her almond shape eyes. “I thought for those used to seeing me every day in my chair, the transformation would be mind-blowing. It was totally liberating.”

Wendy Crawford is another model with a tale similar to Cohen’s. The vivacious blond and former model was struck by a drunk driver in Toronto when she was 19. “I used to be a model and was on my way to the airport to catch a flight for a job in Tokyo when my accident happened,” she relates. “My neck was broken and I was left paralyzed.” Photographed by Miami Ad School graduate Moris Moreno, Crawford appears sitting sidesaddle in her wheelchair. Compelled by the lack of information for women with spinal cord injuries, she founded her own organization, mobilewomen.org to inform women about birth control, parenting and research. Crawford is also working with fashion designers on a project to customize, decorate, and “soup up” wheelchairs for glamour-conscious women with disabilities. “Most of us want to look good and have cool things. I really think there is a global revolution in thinking where people are truly beginning to appreciate the disabled as attractive and productive members of their communities,” she mentions.

Ann Thomas, who recently celebrated her 60th birthday, is a retired trial attorney with multiple sclerosis. Strawser said Thomas approached the project without inhibitions and with incredible sense of humor. “She wanted to be nude in her wheelchair and tied onto train tracks as a locomotive bore down on her like one of those helpless heroines in an old movie. We were able to create the scene in our studio with the magic of Photoshop, and she trusted us enough to allow us to move her around. I was kind of shocked and thought what a great lady to be portrayed so confidently.”

Shelly Baer, who also modeled for Strawser, says the thought of posing nude would have never crossed her mind ten years ago, yet she was motivated to make a statement. “I feel that women with disabilities are rarely portrayed in our culture as beautiful and that their disabilities are just a sliver of who they are,” Baer says. The auburn-maned looker, who was diagnosed with juvenile rheumatoid arthritis when she was three, is a clinical social worker at UM School of Medicine where she works with HIV+ children. “I was one of the nudity girls in the project,” she laughs. “I’ve spoken to another model who says that when she feels down on her self-esteem or is having a bad day, she looks at her photo and feels vibrant and beautiful again.” In a composition both subtle and daring, as well as erotically charged, Baer lies on her belly atop a black Barcelona bed, her back barely covered by a gold diaphanous scarf.

Some of the models chose to pose with the wheelchairs or in environments typifying their interests and sense of independence. One model, Adina Beth, who has a hearing impairment, nuzzles a horse. Other subjects appear in front of their own artwork, while some are shown luxuriating on a beach in the guise of a mermaid or floating on clouds while dressed as an angel.

Student Laura Tillinghast worked with Shanti Nair- a marriage and family counselor with spina bifida- to project her love of the outdoors. An avid sailor, Nair was photographed aboard a sailboat on Biscayne Bay. Perhaps the most arresting image in the show is that of Tatiana Ribiero, photographed by student Carolina Del Rivero. Wearing an elegant black gown, the exotic-looking Brazilian faces the viewer as she sits inside a glass house. Her wheelchair is cast off against a wall in the distance. The stunningly beautiful Riberio, whose spinal cord was injured when she was a teen, pierces the spectator with a sense of vulnerability and dignity. “These women are on a totally different level and never, ever complained when working with us,” asserts Dixon. “I find it incredible that they don’t see themselves as having a disability and are all leading rich, extraordinary lives. These are not victims; they are very powerful people.” 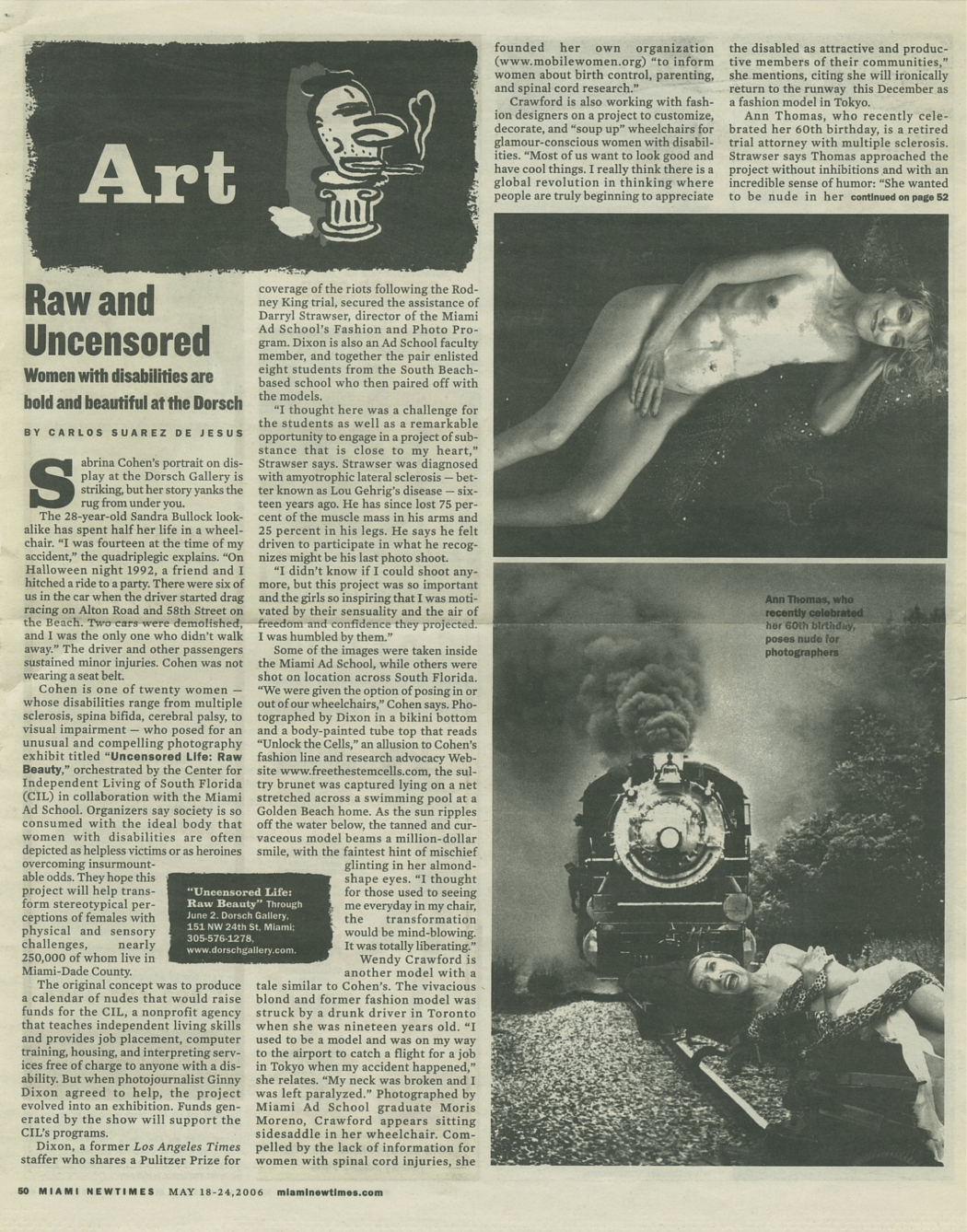